What is varicella or chickenpox, and how can you prevent it?

Chickenpox is a highly contagious infection that is generated by the varicella-zoster virus (VZV). Close contact with an infected person will make it spread as respiratory droplets and aerosolized airborne particles are released as an infected person sneezes or coughs.

It produces a blister-like rash, tiredness, itching, and fever. Each year, chickenpox infected about 4 million cases, 10,600 hospitalizations, and 100 – 150 deaths.

Two doses of the vaccine are 90% effective at preventing Varicella. When you get vaccinated, you protect everyone in your community. This is crucial for people who cannot get vaccines, such as people with weakened immune systems or pregnant women.

Getting away from anyone with chickenpox can reduce the risk of transmission. However, in the end, the best way to avoid chickenpox is to get the chickenpox vaccine.

Children, adolescents, and adults must get two doses of the chickenpox vaccine even if they have never been infected with chickenpox or were never vaccinated.

The chickenpox vaccine is very effective at preventing Varicella. Therefore, most people who get the vaccine will not get infected with chickenpox. However, if a vaccinated person gets chickenpox, the symptoms will be milder with fewer blisters.

Now, suppose you are not sure whether you have been infected before or you have got the vaccine or not. In that case, you can take a varicella titer test so that the professionals can evaluate your immunity to this contaiguos disease.

What is the varicella titer?

Chickenpox, or varicella, is a viral disease that is transmitted through particles transmitted by coughing, sneezing, or talking. When people get this infection, the immune system makes proteins called antibodies. Antibodies help the body to resist re-exposure to the virus in the future.

Varicella Titer (or VZV titer or varicella antibody titer test) is another type of testing process that is used for checking the concentration of IgM and IgG antibodies in the blood. In other words, it is a blood test for chickenpox antibodies. It also helps to find out whether the person has got a particular vaccination or not. In other words, this test is generally used to diagnose acute infections or past exposure or vaccination.

Who should get a varicella titer test?

Anyone who needs the varicella vaccine or wants to know their immunity status should get this test. This test is usually recommended for the following people: 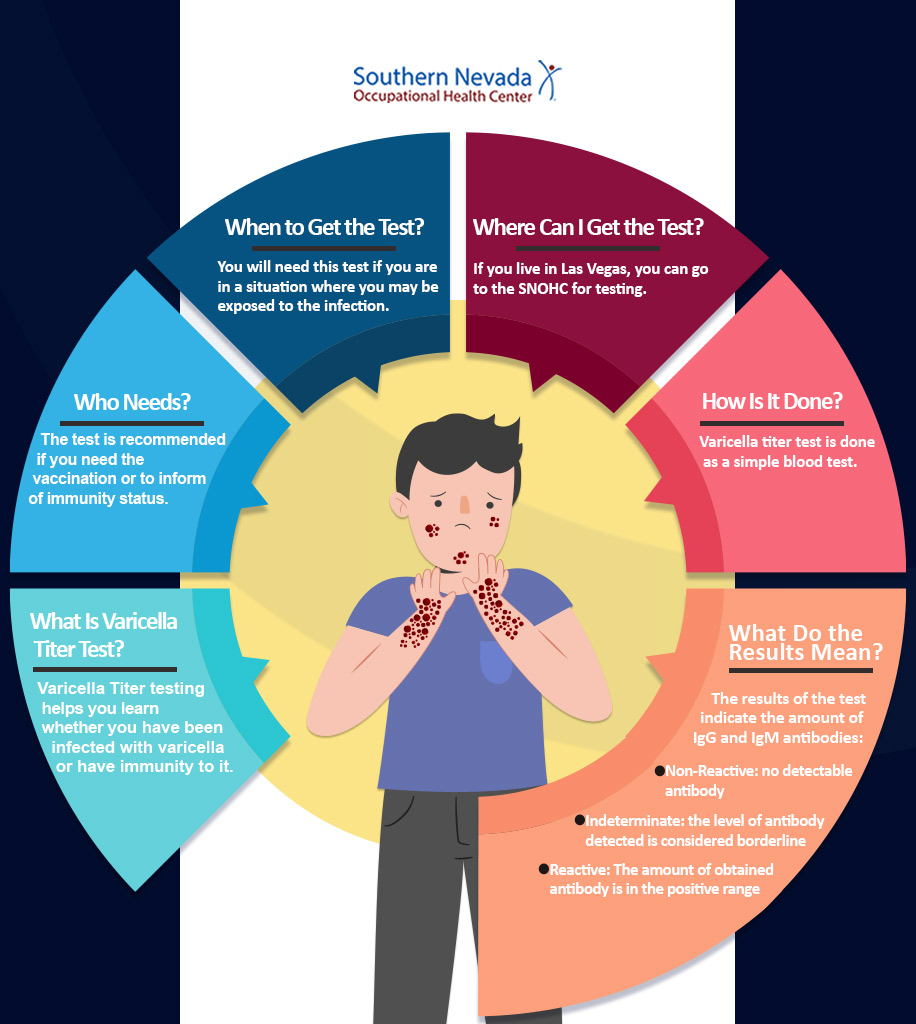 When to get a varicella titer test

If you are in a situation where you feel you are exposed to the varicella virus and not aware of your immune status, you should have this test.

Why do we need a varicella titer?

When the Varicella-like rash appears on the body, Varicella Titer is conducted to find out whether there has been a rapid increase in IgM antibodies and 4 times more increase in the IgG antibodies. It indicates that the person is suffering from chickenpox. Also, if your vaccination record is not available, this test will show if you have had the disease before or you have been vaccinated.

How to read varicella titer results?

There is protective immunity against reinfection in such individuals. However, there might be other tests required to rule out the infection causing agents.

That is why it is better to consult our experts when it comes to the varicella antibody titer test. They will guide regarding your reports about the treatment that you should be taking

The results of the varicella titer indicate the amount of IgG and IgM antibodies. The varicella zoster titer range is interpreted as follows:

If your test result is negative, equivocal, or borderline, it means you need to get a varicella vaccine or another booster shot.

Keep in mind that if you have received the varicella vaccine recently, avoid the titer testing. Six to eight weeks after the vaccination, you can get this test.

The varicella titer positive means that you have had the infection before and are now immune to it.

What does a high varicella titer mean?

A detectable amount of antibodies in the blood sample indicates that you have already had the infection.

What does a positive varicella IgG mean?

IgG positive, along with positive IgM result, indicates a recent infection. However, if the IgG result is positive, and the IgM result is negative, it shows a previous infection or vaccination against the disease. These people have protective immunity to reinfection.

Why is my varicella titer negative?

A negative result indicates that a significant amount of Varicella IgG antibodies has not been found. On the other hand, this means no current or previous infection. These people are at risk for primary infection.

Where to get varicella titer in Las Vegas

Southern Nevada Occupational Health Center offers a wide and complete range of occupational health services including the varicella titer test in Las Vegas. If you need to do this or other tests, you can get an appointment online. Also, refer to the main page of the website.