What you must know about employment drug and alcohol testing? 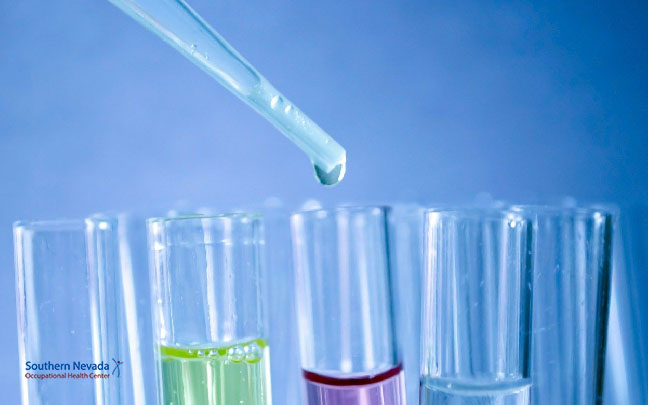 There are several ways to avoid work-related injuries such as providing training, protecting mechanisms for managing risk examinations, and safety reviews. Another simple and preventive method is employment drug and alcohol testing. It is an effective way to create a safe work environment. This procedure can reduce the risk of hiring people who may pose a severe threat to themselves and others in safety-sensitive work environments. Taking this precautionary step has shown a massive decrease in drug-related work accidents.

Employment drug and alcohol testing have become more common after congress passed the Drug-Free Workplace Act of 1988. Since then, the government developed obligatory drug testing guidelines for many governmental employees. Federal employers are obligated to follow drug test methods created by the Substance Abuse and Mental Health Services Administration (SAMHSA). According to OSHA, employees and employers have some rights in the workplace environment which they must be aware of them. In this blog, you learn about drug and alcohol testing rules. We have covered what employees and employers need to know about OSHA rules in another topic.

Why occupational drug and alcohol testing are necessary?

Using drugs and alcohol could be dangerous to the workplace and workers. Studies indicate that drug abuse costs employers around $81 billion per year and causes some critical problems. A drug abuser employee is 3.6 times more likely to participate in an event and 6 times more likely to make a worker’s compensation claim, according to the National Institute on Drug Abuse.

What are the common signs and difficulties of alcohol and illegal drug use?

What are the benefits of pre-employment drug and alcohol testing?

When do employers should request for drug testing?

According to recent statistics, companies have employed more than 74 percent of all current illegal drug users, drug abusers, and alcoholics. These People connect to up to 40 percent of industrial fatalities in the U.S. The test may be due to several disorders in behavior like Psychological, and behavioral. The main types are as following:

Pre-employment: This is when an employer looks for all potential employees or applicants before they get employed.

Post-incident: this is when an employer tests employees after an incident that causes an injury, damage, or a near miss. Authorities introduced this way in an attempt to protect the employer from responsibility if an employee injures himself.

Random: choosing some employees in irregular and unusual periods and testing them. It has been a significant deterrent for the prevention of drug usage in companies & organizations.

If you’ve made up your mind to ask potential employees to pass an employment drug and alcohol test of the three mentioned types, you’ll need to determine what substances you want to test for, and what kind of drug test you want employees to take. Some employers only want their pre-employment drug tests to screen for one particular substance, while others want to be able to screen for all elements, alcohol, and for as far back in time as possible. 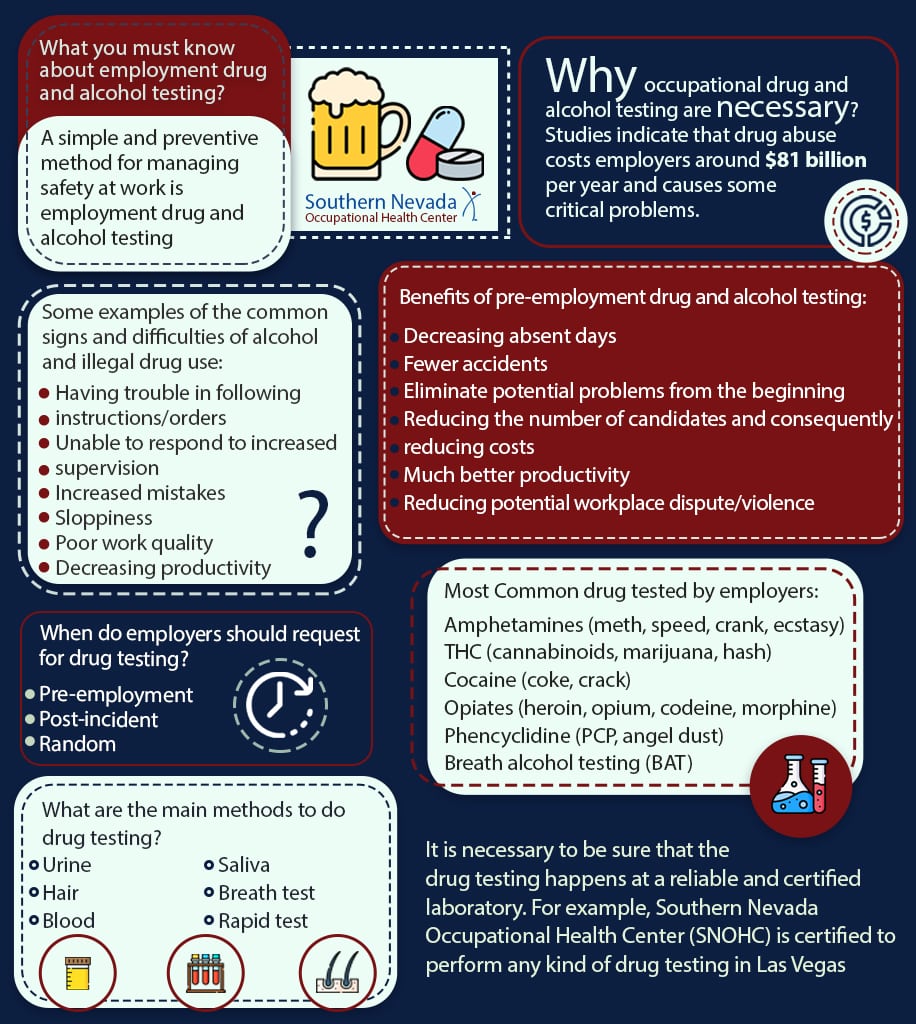 What are the most common drugs tested by employers?

Despite accusations of violating privacy and considering that different states have different rules, but yes, it is legal. In some circumstances, the law needs drug testing; for Instance, industries controlled by the U.S. Department of Transportation (DoT) are covered by federal or state employment drug and alcohol testing requirements. Employers can not choose employees selectively for a particular job while not testing others – it’s all or none.

What are the stages of laboratory tests for drug testing?

It is necessary to be sure that the drug testing happens at a reliable and certified laboratory. For example, Southern Nevada Occupational Health Center (SNOHC) is certified to perform any kind of drug testing in Las Vegas.

Any trustworthy drug screening program will involve a two-step process Initial (immunoassay) and confirmatory are the methods most used to test for drugs.

Using a compound of both tests provides a high level of sensitivity and specificity, meaning there is a minor chance for false positives or false negatives

What are the main methods to do drug testing? 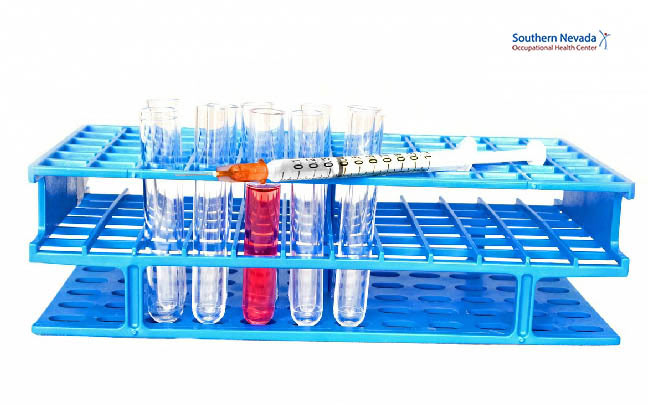 Drug testing may include several different kinds of specimens, such as:

Urine: It is the most frequent sample type used for drug testing by employers. Urine analysis proves the usage of cocaine, marijuana and THC, cocaine, opiates, and, and alcohol. It will show the presence of a drug in the system after the drug effects have vanished.

Hair: Hair testing is a measurement to provide drug use in a 90-day to six months. It only shows the past uses of drugs. Hair shows cocaine, marijuana and THC, cocaine, opiates, and, ecstasy, and alcohol. In general, hair testing allows the most prolonged time frame to discover drugs, as they collect the sample in full view of the lab personnel; it minimizes the risk of substitution.

Blood: Clinics use a blood test to measure amounts of the drug in the blood circulation system at that very time, usually from minutes to hours. It allows you to determine if a person is under the influence of drugs or alcohol.

Saliva: Oral fluid, or as called saliva testing, is the most well-known technique to test for drug use after urine drug analysis. It is often named as a mouth swab test and is useful to know about the new drug uses. For at least 10 minutes before they collect the sample, one must avoid food or drinks food or drinks. Doctors use this test for examining different kinds of drugs like alcohol, cocaine, marijuana.

Breath tests: The testing devices, which are generally known as breathalyzers, are used to measure alcohol levels in the blood at the very moment. It shows the level of current drunkenness.

Rapid tests: Rapid tests often use urine or saliva for testing. One benefit to rapid tests is that they provide a screening result within 4 hours on average.

It is safe to assume that drug and alcohol abuse will continue to spread in the United States and globally. More people are using drugs compared to the last 15 years. The cost to employers will be high, so they have a legitimate right to create a safe work environment. Therefore, occupational drug and alcohol testing program remain essential for the future progress of companies. For some industries like transport, construction, engineering, mining- as they demand high concentration, precision, needless to say, the first mistake is the last- you will not tolerate drug abusers. It is especially crucial in today’s world of the widespread availability of drugs and alcohol. With one precautionary step, you could prevent stress, confusion, and the possible crisis of dealing with a misbehaving employee. SNOHC has been performing drug and alcohol testing in Las Vegas for more than 10 years. For any question regarding drug and alcohol testing, please visit here. 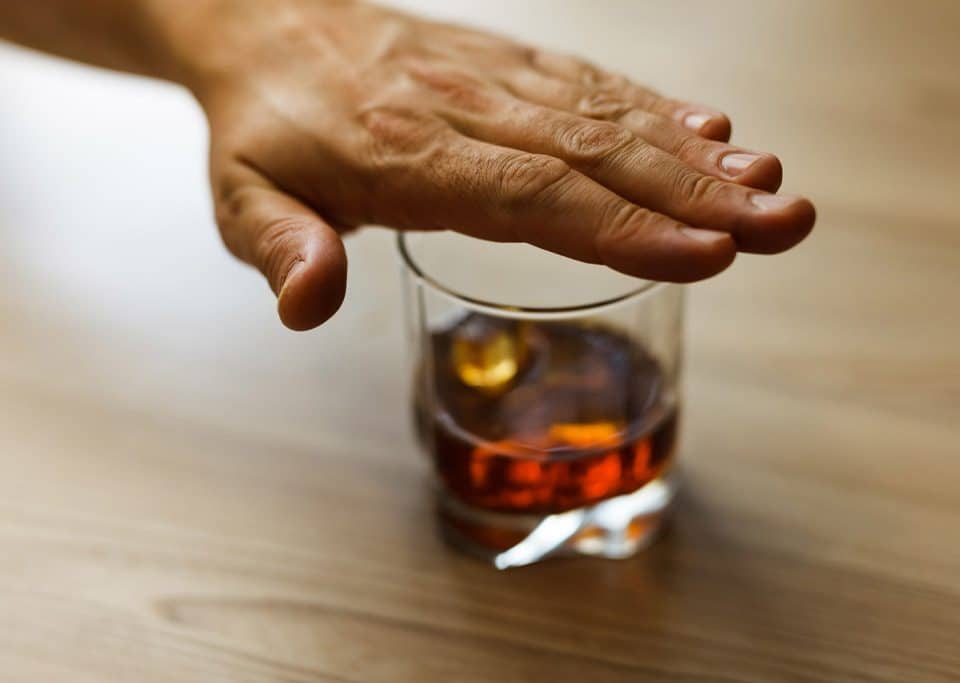 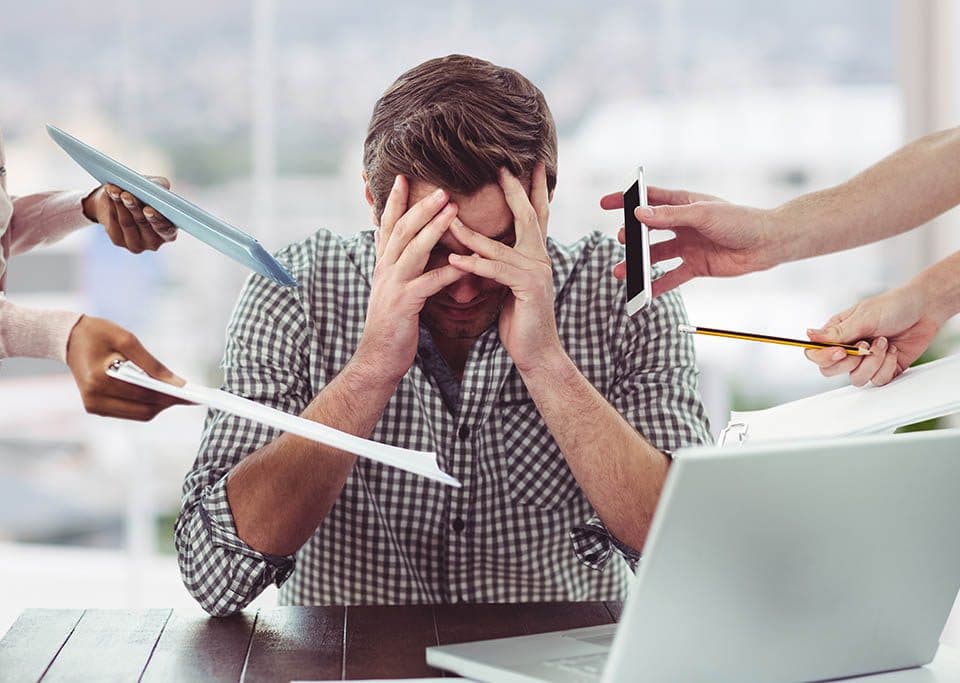 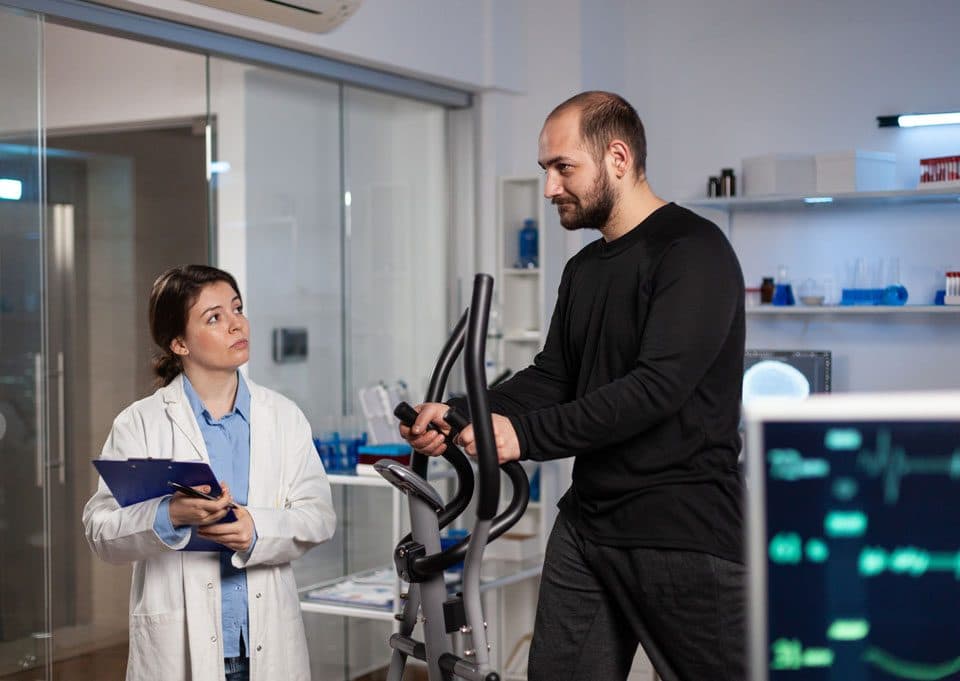